What are the general themes and dynamics for this time of the autumn equinox as seen through the lens of the oracle of the Tarot?

Thursday 22 September marks the mythical British mid-harvest festival of Mabon, heralding the arrival of the autumnal equinox on Friday 23 September.

During an equinox the Sun crosses what we call the “celestial equator”—an imaginary extension of Earth’s equator line into space. The equinox occurs precisely when the Sun’s center passes through this imaginary line.

In the Northern Hemisphere, when the Sun crosses the equator going from north to south, this marks the autumnal equinox and when it crosses from south to north, it marks the vernal equinox.

This is reversed in the Southern Hemisphere which is now experiencing the spring or vernal equinox.

Now we have left behind the zodiac sign of Virgo, the Queen of the Harvest, and entered the astrological territory of Libra The Scales, representing the ever changing balance of day and night. Libra is represented in Tarot by The Justice card, and also by The Two of Swords pictured above, representing the first decan or the first ten days of Libra.

Libra is the only Zodiac constellation represented by an inanimate object, and not by an animal or a mythological character. Those born under Libra are famously cool in temperament, intellectual, and can be somewhat emotionally detached but also volatile.

According to the Roman writer Marcus Manilius, Roman judges were born under the sign of Libra. The moon was said to have been in Libra when Rome was founded, and therefore the Roman Empire itself (at least, according to Manilius) began on a just and balanced foundation. Or at least, a legalized, rational, process based system, and Libra is good at process, though it is also ruled by Venus, and can be delightfully pleasant and charming when it is in the mood.

The first harvest festival of the year was Lammas (‘Loaf Mass Tide) celebrated on the first of August. This later second harvest, Mabon, ends on 24-29 September this year.

The origin of the name, Mabon is related to the Romano- British god Maponos, whose name means “Great Son”; his mother Modron, in turn, is likely related to the Gaulish goddess Dea Matrona (modern word ‘Matron’.)

Looking at it another way, the cardinal masculine air sign of Libra is ‘the son of’ the feminine mutable Earth sign of Virgo, which is portrayed in Tarot as The Hermit but also The Empress

Guidance from the Tarot

The reader is working with The Legacy of The Divine Deck. illustrator Ciro Marchetti, and is using a general 5 card Compass Spread for a general overview of the mood, energy and dynamics of late September into October 2022. 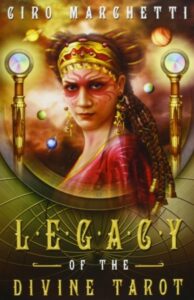 We said here on Ask Astrology last month that September would be anything but a quiet news month. This turned out to be something of an under exaggeration.

October may not see the death of a much loved national figurehead, and we also witnessed the death of Mikhail Gorbachev, a huge if controversial figure.

The Queen’s funeral was watched by more than an estimated 5.1 billion people –that’s about 63% of the world’s population.

I was thirteen at the time of her Silver Jubilee in 1977 when she had reigned (not ruled) 25 years, and my mother told us, “run down to Oliver’s (the corner shop) and you will see the Queen.” So we did, and about half an hour later, her car drove by, and we saw her smiling face as she waved out of the window, heading down the road into Durham City. We had a street party in a children’s play park behind our house. I went round with a tray, offering (non-alcoholic) drinks to people, feeling very grown up and responsible. It was a sunny day with fancy dress parties, food and drink and lots of smiling faces. A good day.

Elizabeth was not only our own queen in Britain; much respected and loved for her hard work, unstinting duty, forthright common sense, kindness and mischievous sense of fun (a first decan Taurus with a lot of Aquarius in the mix) but she was our first post- Imperialist monarch, Head of the Commonwealth.

“The Commonwealth of Nations, simply referred to as the Commonwealth, is a political association of 56 member states, the vast majority of which are former territories of the British Empire.” Founded: 11 December 1931

The Wheel of Fortune-Justice-Hanged Man 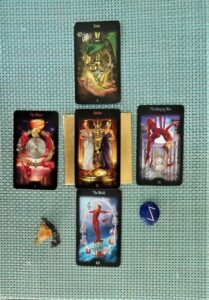 This central line of cards is reflecting the current situation as this war in Ukraine enters a new cycle during Libra.

The Hanged Man, sitting in the near future says this will involve great additional sacrifice on both sides, as if not enough has been lost already.

No-one knows the future. Time is not a straight line. It is not linear, except artificially, for the purposes of daily living with our clocks, diaries and calendars. Card readers do not know the future, and the interpretation is very complicated. But this new cycle, as shown by the cards may continue into late February-March 2023. Why? The Hanged Man correlates with that time frame, and the zodiac sign of Pisces.

Mr Putin is mobilizing civilian reservists –shown by that top card, the Six of Pentacles. This is the card of local neighbourhoods and communities. These new troop are not ready for combat. But this war cannot end until Mr Zelenskyy is ready to agree to it. The Hanged Man says there is no reason why he should agree, surrendering lands and towns annexed by force and by the means of illegal referenda. But might he? Putin clearly hopes so. At this point he would almost certainly settle for this and claim it as a win.  But now Ukraine-and the rest of the world- has has seen what Mr Putin really wants- and basically that’s everything, the whole of the Baltic. It is not possible to put that genie back into a bottle.

October will be hugely eventful, not least as Mr Putin reacts to recent military reversals in Northern Ukraine by seeking to consolidate the illegal land grab in Eastern Ukraine by means of a series of referenda and the partial mobilization of a non-combatant population.  Zaporizhzhia, Kherson, Luhansk and Donetsk regions will have “elections” by the end of the month to join Russia.

Justice represents the zodiac sign of Libra itself, reflecting the astrology of the time period we are looking at.

This card does just what it says on the tin. Justice, the rule of law and order, and simple fair play is the issue of the moment, on the world stage and close to home.

There is public disorder on the streets of many countries, including Britain right now as Islamists clash with Hindu extremists in the cities of Leicester and Birmingham in sectarian hostilities triggered by the flash point of a cricket match held in the UAE when India lost to Pakistan.

The first half of October is dominated by the final Saturn in Aquarius conjunction square Uranus in Taurus. There is a lot of tension here to do with the economy, technology and social unrest.

There will be likely more of this kind of thing, and in other countries too, during the first half of October before it starts to calm down again.

This card is also talking about practical legalities, such as wills and contracts. Many of us will be reviewing our energy and other standing contracts this coming month, looking for ways to better manage our money this coming winter.

The Wheel of Fortune reminds us that while there are things we cannot change, we still have choices. We can make our own decisions, in working out how best to manage our own situations.

The Six of Pentacles correlates with the second decan of fixed Earth sign Taurus and is ruled by Mercury, planet of communication, travel and trade. This card talks about the meaning of local community. It talks about our neighbours, and our neighbourhoods, our local identity and heritage, local communities, schools, hospitals and other local infrastructure.

A lot of small local transactions depend on cash. The number of available ATMs is reducing in the UK by an estimated 25% in the past 12 months. But wherever we are, we need to be aware that there are times when we need actual cash, or when digital banking may let us down, and then what?

Close to home this month we need to be having conversations about personal and family spending and budgeting.

Mr Putin is desperately counting on the people in Europe and the UK being unwilling to tolerate inconvenience, hardship or discomfort for any length of time. He calculates we are too soft, and that we won’t care enough about Ukraine if it’s not right outside our own front doors.

If Europe becomes divided over the issue of energy costs, as we have been seeing with Hungary’s continued imports of Russian gas, and if we then reduce the support to Ukraine, Mr Putin could still win. If he does, we will all be paying a much higher price further down the road.

The Justice card is a warning that doing the right or the wise thing does not come easy or cheap.

Covid is calmer but it has not gone away yet. The reader’s elder daughter has recently had it for a second time, although not seriously. We have war, worries over famine and energy bills this coming winter. We have rising food prices and extreme weather events with more to come this coming month as indicated by The Hanged Man, Pisces, which can mean more river flooding or mud slides.

Let’s hope not. But the world is undergoing an unsettled period with many events that are way beyond our personal control. Such periods have happened many times before, often coinciding with increased solar activity, over which we have zero hope of control. And then in time, things have calmed down again on a new footing as they will again.

On October 25, the New Moon in Scorpio is a partial eclipse of the Sun. It is conjunct Venus, trine Mars and square Pluto.

Eclipses announce profound and momentous changes but the action is slow and gradual. Money is a focal point here, while the warning of Scorpio is like that movie ‘Fatal Attraction’ and reminds us to beware of intoxication when our passions are running high.  This is a time to think twice. What we want is not necessarily what we need. What we fancy is not always good for us.

Mr Putin is a Libra sun sign subject, but he has Scorpio rising and a difficult fixed star is also adjacent his sun, Algorab the Crow, voracious and destructive. This eclipse will not mean good news for him. Acts of violence and vengeance will rebound on him, not immediately, but it’s guaranteed. Mr Putin has nothing glorious, inspiring or happy to offer.

President Biden is a Scorpio sun sign subject, and with mid-term elections coming up 8 November, this eclipse suggests that many commentators will be proven correct. He really does have his work cut out, and he is likely to lose control of Congress.

The reader has also drawn Sowilo the sun rune- that bright blue stone with a  straight cut ‘S’ on it. This seems apposite for a reading done at the equinox.

The Wheel turns. The sun will return, bringing happiness and healing, new growth. There will be good times too, things to enjoy, and blessings to count in the next coming weeks

Take care till next time

Hurricane Season Heats Up | AstroDispatch – Astrology Around The Web

Hurricane Season Heats Up | AstroDispatch – Astrology Around The Web

Best Books to Read This Summer Based on Your Zodiac Sign

The 3 Zodiac Signs With Rough Horoscopes On September 19, 2022

What Are Fall Date Ideas Geared For Your Zodiac Sign?

The 3 Zodiac Signs With Rough Horoscopes On October 27, 2022