The Different Artistic Representations of the Empress Card

The first tarot cards were hand-painted and put to print using wood blocks in the middle of the 15th century. New decks were few and far between from the 15th to the 20th century. Even with the printing of the most popular and best-known Rider Waite deck in 1909, tarot decks did not start to be printed in large numbers until the later part of the 20th century.

By the start of the 21st century, deck printing rapidly expanded. If you do a current search on Amazon or eBay for “tarot cards”, you will get results well over 5,000 on Amazon and over 10,000 on eBay. More and more new decks come out every month. This article will look at the various artistic representations for the Empress card over the history of the tarot.

This article is meant to be a visual feast of card examples, more than a history lesson. Changes in artistic style and printing show up clearly from one time period to another. The earliest decks were hand painted and printed using the woodblock technique to produce multiple copies.

The Visconti-Sforza tarot is the name assigned to roughly 15 decks printed in the middle of the 15th century. No complete deck exits, but examples from the different decks can be found in various museums, libraries, and private collections around the world.

The Empress appears seated, with a shield and staff, indicating her authority, and the power she has to make decisions concerning her subjects. 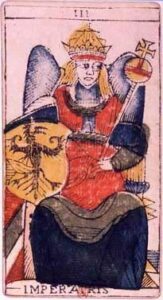 In 1909, we get the first modern printing deck, with much more vibrant colors and a simpler artistic technique. In this version of the Rider Waite Tarot,  the character is seated, holding a scepter; her shield is on the ground beside her, shaped like a heart. She is out in nature, where life is abundant. The forest is healthy, with a stream and waterfall running behind her. Rich fields of wheat are in the foreground. 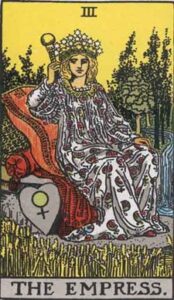 The deck was developed between 1938 and 1943, but did not get published until 1969, after the creator, Aleister Crowley, and artist, Freida Harris had both died. Crowley and Harris added a great deal more symbolism to the card, especially Egyptian iconography. 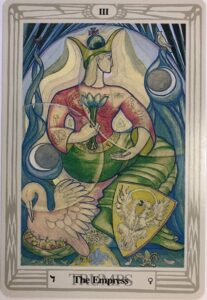 Based on Greek mythology, this version of the Empress is represented by Demeter, the Goddess of the Earth and harvest. She wears a city as her crown and walks through fields of wheat. 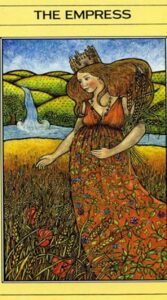 One of the first decks to introduce a truly modern art style, as well as three additional icons from three other systems of thought and divination: Hebrew letters (upper left corner), runes (upper right corner), and astrology (bottom right corner). Hexagrams from the I-Ching appear on other cards in the deck. 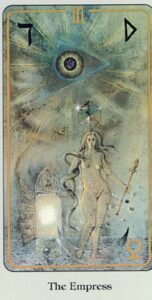 This deck keeps the 78-card structure, but renames nearly all the Major Arcana cards. In this rendition, the Empress becomes Creativity. She wears a crown of stars and blends with the natural world, connecting with the sky, land, and waters. 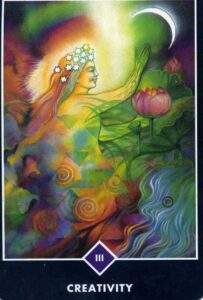 This deck clearly shows the influence of computer design to enhance the artwork, and this represents one of the early decks to break with the traditional image of a woman as the Empress. 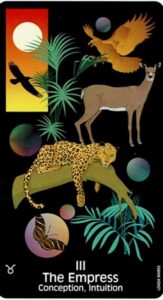 Using a watercolor and impressionistic art style, the Empress is shown getting dressed and wearing a crown; a tiger and lemur share the card with her. 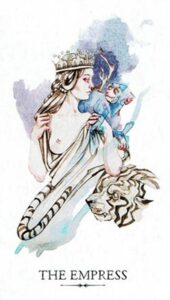 And finally, a blend of hand-drawn artwork enhanced by computer design, featuring a young woman holding a flower, ready to be planted. She has a bird in a nest resting on her head. Stalks of wheat frame her in the card. 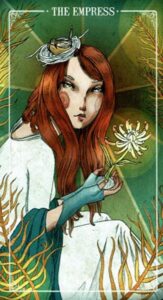 From There to Here

Just a final look comparing the earliest cards with one of the most current.

The Daily Horoscope For Each Zodiac Sign On Thursday, August 25, 2022

The Karmic impact of Saturn in Scorpio

8 Zodiac Placements That Have The Hardest Time Finding Love

The 3 Zodiac Signs Whose Fling Becomes Exclusive During Venus Opposite Neptune On September 24 – 26, 2022

Sensitive Moon Signs, Ranked From Most To Least Emotional